Google’s famous offices may look a bit different for employees once it’s safe for them to begin returning to work.

Google CEO Sundar Pichai said last week that the company was making changes to its physical spaces to better support employees in a future Pichai said would include “hybrid models” of work.

“I see the future as definitely being more flexible,” Pichai said during a video interview for Time 100. Pichai was part of this year’s list of the most influential people in the world.

“We firmly believe that in-person, being together, having that sense of community, is super important for whenever you have to solve hard problems, you have to create something new,” he said. “So we don’t see that changing, so we don’t think the future is just 100% remote or something.”

Pichai said Google was “reconfiguring” its office spaces to accommodate what he called “on-sites” — presumably, days when employees, who work mostly from home, gather in the office.

Google was one of the first major tech companies to announce that employees might continue working from home until July 2021. At the time, The Wall Street Journal reported that the decision was made in part to help employees whose children might be learning partially or totally remotely this school year. Pichai said several factors went into the decision.

“Early on as this started, I realized it was going to be a period of tremendous uncertainty, so we wanted to lean in and give certainty where we could,” Pichai said. “The reason we made the decision to do work from home until mid of next year is we realized people were trying hard to plan … and it was affecting productivity.”

Pichai said making such a long-term decision forced the company to embrace its new reality: that working from home is here to stay, at least in some capacity. And employees seem to agree: A recent internal survey at the company found that 62% of employees said they felt they needed to be in the office only “some days” to do their work well, while 20% didn’t feel as if they needed to come to the office at all.

Pichai also touched upon a larger issue for those living in the San Francisco Bay Area: affordability. The cost of living in the Bay Area has in recent years become too high even for those who might be considered high earners in other regions. San Francisco is the most expensive city in the US for homebuyers, with those interested in buying a home in the city thought to need a salary well over $100,000 to be able to afford a mortgage.

High housing costs mean those who work in San Francisco or its surrounding cities, like Mountain View, where Google is based, often need to move far outside the city to be able to afford housing. That results in long commute times for Bay Area residents. In 2019, a study by Apartment List found that more than 3.5 million Americans, known as super commuters, commuted at least three hours a day. In some Bay Area counties, the number of super commuters increased as much as 126% from 2009 to 2017.

“It’s always made me wonder, when I see people commuting two hours and away from their families and friends, on a Friday, you realize they can’t have plans,” Pichai said. “So I think we can do better.”

Pichai said Google long had a philosophy that the office should be fun and that friction should be reduced when possible — for productivity reasons, he said, but also to improve employees’ personal lives. Subjecting them to lengthy commutes to a physical office may not jibe with that philosophy in a post-coronavirus world. 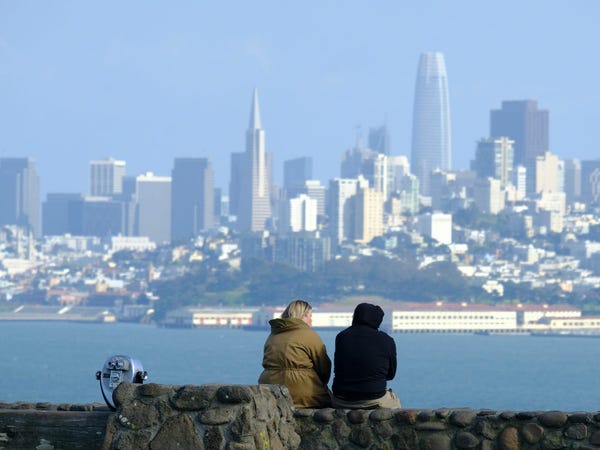 While it’s not clear yet whether reports of a Silicon Valley exodus are true or overhyped, there are some signs a migration has already begun.

In May, a report from Redfin indicated that 72% of its San Francisco-based users were searching for homes outside the city. And data from the home-rental site Zumper showed that rents were plunging across the Bay Area in May, with decreases of as much as 15.9% in Mountain View and similar drops in Facebook’s home of Menlo Park and YouTube’s home of San Bruno.

In San Francisco proper, there’s been a 9.2% drop in rental prices since this time last year, with the city experiencing its lowest rent since early 2017, Zumper found.

An August report from Zillow showed that the inventory of available homes has grown 96% year-over-year, a spike that’s not evident in other cities like Boston, Miami, or Los Angeles.