Pakistan to give humanitarian assistance worth Rs5bn to Afghanistan, says Qureshi after Kabul visit 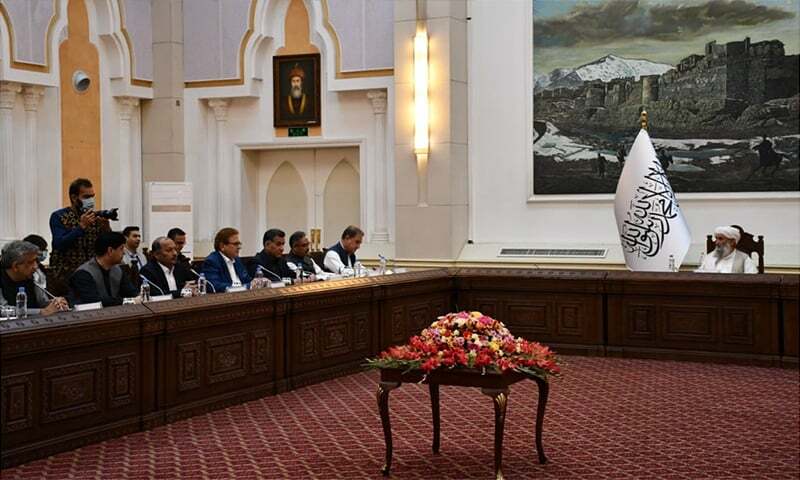 Foreign Minister Shah Mahmood Qureshi announced on Thursday that Pakistan will give humanitarian assistance worth Rs5 billion to Afghanistan.

Speaking to the media after a day-long visit to Kabul, the minister said: “If they need medicines at hospitals […] or whatever else their priorities are, they will tell us and we will be ready to give them humanitarian assistance in-kind.”

During the press conference, Qureshi said that the Afghan government recognised and were “thankful” for how Pakistan had helped them in times of difficulty and the way the country had housed refugees for decades.

“Right now there is a transition, there are challenges and to overcome that, Pakistan will play whatever role it needs to play,” he said.

The foreign minister said that the high-level delegation that accompanied him on the trip also included officials from different ministries and institutions.

“The point of taking [the delegation] was so that after the main discussion, they would break off into sub-groups and hammer out the details of different issues related to visas, trade and border movement.”

He said that to follow-up on the issues discussed during today’s meet, a Taliban delegation will visit Islamabad in the next few days.

Qureshi said that the Taliban leadership also assured their complete support on projects of interest, including the CASA-1000 project, the TAPI gas pipeline project and the Transnational Railway project.

Commenting on various other decisions made during the meeting, the minister said that Pakistan authorities would no longer require Afghans crossing the border to obtain a “gate pass” from the interior ministry.

He said that Pakistan will allow the duty-free import of fruits and vegetables from Afghanistan to facilitate bilateral trade and border crossings will remain open 24/7 for trade.

He also announced that Afghan businessmen will now be able to get a visa-on-arrival, adding that the embassy in Kabul had also been authorised to issue five-year visas to businessmen.

Qureshi also said that the Afghan leadership had assured the Pakistani delegation that it would not allow anyone to use its soil against Pakistan, including the Tehreek-i-Taliban Pakistan (TTP) and the Balochistan Liberation Army (BLA).

Earlier today, Qureshi had arrived in Kabul, leading a high-level delegation to meet with Afghan officials and leaders on bilateral relations and ways to strengthen cooperation, the Foreign Office (FO) said in a statement.

They were received by Afghanistan’s Acting Foreign Minister Amir Khan Muttaqi and Pakistan Ambassador to Kabul Mansoor Ahmad Khan at the airport’s tarmac.

Later, Afghan Deputy Prime Minister Abdus Salam Hanafi hosted a luncheon in honour of Qureshi and his delegation. A large number of members of the Afghan interim cabinet were present on the occasion.

Hanafi welcomed the foreign minister to Kabul, while Qureshi thanked the Taliban leadership for their “warm hospitality”, according to an FO statement.

In his remarks, Foreign Minister Qureshi said Pakistan was determined to help the Afghan people to save them from an economic crisis.

Speaking to the media after the meeting, the foreign minister said that he had a detailed and result-oriented discussion with the Taliban leadership.

Qureshi said that almost all members of the Afghanistan cabinet were present, and the two sides talked about a wide array of bilateral issues, including steps to increase trade and regional connectivity.

The minister said that he had also been accompanied by a delegation, consisting of representatives from different ministries, that met with Afghan officials. “Hopefully, their delegation will come to Islamabad in the next few days so that we can take these talks forwards and settle matters.”

He reiterated that the meeting was “effective” and said that he would give more details once he arrives back in Islamabad.

The FO earlier said: “During the one-day visit, [Qureshi] will hold talks with Acting Foreign Minister Amir Khan Muttaqi and call on [the] leadership of the interim government in Kabul. He will meet other Afghan dignitaries as well.”

The talks will cover the “entire spectrum” of relations between Pakistan and Afghanistan with a focus on methods to deepen cooperation between the two countries in diverse areas, the FO said.

“Utilising the opportunity, the foreign minister will share Pakistan’s perspective on issues of regional peace and stability.”

The FO statement said that as a “close fraternal neighbour”, Pakistan had always stood by Afghanistan, mentioning a number of measures in this regard such as keeping border crossing points open, the institution of a facilitative visa regime for Afghan nationals and provision of humanitarian aid and assistance in the form of food items and medicines.

FM Qureshi’s visit comes while Russia is hosting the Taliban for talks in Moscow.

Attending the talks on Wednesday, Pakistan’s Special Representative for Afghanistan Ambassador Mohammad Sadiq emphasised the need for extending humanitarian support to Afghanistan, saying that the international community “must step up efforts” for the purpose.

Ambassador Sadiq conveyed to the other participants of the meeting, including a Taliban delegation, that peace in Afghanistan would benefit the entire region in terms of stability, secure borders, enhanced connectivity, return of refugees and countering terrorism, a statement issued by the envoy said.

He reiterated Pakistan’s firm belief that peace went hand in hand with prosperity and economic stability and highlighted that “Pakistan’s constructive role in [the] Afghan peace process is well-recognised and acknowledged by the international community.”