How Trump’s Tax Returns Could Affect The Election

How Trump’s Tax Returns Could Affect The Election 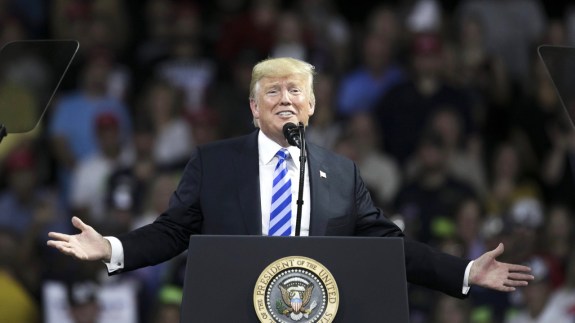 On Sunday, a New York Times exposé on President Trump’s tax returns revealed decades of tax avoidance and millions of dollars in business losses over the past two decades. The picture painted by Trump’s returns is sharply at odds with the shrewd, deal-making image the president has tried to fashion as a real estate mogul and TV star on a show built around his business prowess, “The Apprentice.” Now, five weeks from Election Day, the question is will these new revelations affect the presidential race?

We’ll take those one at a time, but spoiler alert: Past polling and research belies the notion that “nothing matters” when it comes to public perceptions about the president.

In May 2019, after The New York Times published a report that showed Trump had lost around $1.2 billion between 1985 and 1994, public polling found the story could lower public opinion regarding Trump’s business acuity. In a Politico/Morning Consult survey, 54 percent of voters said Trump had been a “very successful” or “somewhat successful” businessman, while only 36 percent thought he’d been unsuccessful. But after being presented with information about Trump’s financial losses, the share of voters who thought he’d been a successful businessman dropped to 43 percent. And that slide was felt across the board, falling more than 10 percentage points among Democrats and Republicans, and 8 points among independents. Meanwhile, another May 2019 poll from Fox News suggested that evidence against Trump’s business savvy could influence the attitudes of a small but meaningful share of voters: 20 percent said there was a “strong” or “some” chance that new revelations could affect their views of him.

That 2019 polling squared with findings from a study by political scientists at the University of Maryland, which found that voters’ opinions of Trump’s business skills fell among both Democrats and Republicans when told how Trump had benefited substantially from his family’s financial help. The study showed that a lack of knowledge about Trump’s background mattered to how Americans perceived him, as a sizable share of Americans — around 40 to 50 percent — didn’t know that Trump grew up very wealthy and received millions of dollars in financial assistance from his family. If respondents had fewer misperceptions about the president’s financial background and the aid he received from his family, they tended to rate his business competence more poorly, the study found.

All in all, past surveys and research suggest that The Times’s latest story — which is more significant in scope and covers a more recent part of Trump’s business dealings than past revelations — could put a dent in how the public views Trump’s business acumen. Whether that actually happens may come down to how much sustained media attention the story receives. For example, will the first presidential debate, on Tuesday night, dwell on Trump’s tax returns?

If the tax returns do stay in the spotlight, there is reason to think they could hurt Trump electorally. For one, Trump is an underdog for reelection at the moment and the clock is ticking — any day during which he’s not making up ground is a problem. But the malleability of voters’ views of Trump’s business record is also notable because we have reason to think Trump’s business credentials played at least some role in his electoral success in 2016, and may continue to undergird some of his support today.

First, Trump’s image as a business maven helped him attract support in the 2016 Republican presidential primary. In a February 2016 Gallup survey, 16 percent of Republicans1 cited his being a “good businessman” as a key reason for their support, a trait that trailed only his political outsider status (22 percent of respondents) as a factor in GOP voters’ support. And as a September 2015 Pew Research poll showed, 65 percent of Republicans2 wanted someone with new ideas and a different approach — something Trump gave them in spades as a businessman outsider.

Trump’s image as a successful businessman may have also played a part in his defeat of Hillary Clinton in 2016, too, by helping to fuel the view that he would handle the economy better. In the national exit poll, 48 percent of voters said Trump would better handle the economy, compared to 46 percent for Clinton. Those same exit polls found Clinton leading Trump on who voters thought would better handle foreign policy (by 11 points) and who would be a better commander in chief (by 3 points). Voters, in other words, thought Trump was best prepared to handle the economy relative to other issues.

That view was especially prevalent (and critical) among independent voters, particularly in key swing states. Among independents nationally, 48 percent preferred Trump on the economy versus 43 percent who picked Clinton. And independents in Florida, Michigan and Wisconsin all preferred Trump to Clinton on the economy by double-digit margins, possibly boosting Trump’s performance in three of the most critical states in the Electoral College, all of which he won by incredibly narrow margins.

Trump’s relative strength on the economy has continued to be apparent in 2020, even as the country’s economic conditions have taken a massive hit due to the coronavirus. His approval ratings on the economy have tended to run ahead of his ratings on other issues, such as crime, education, foreign policy, etc. While the strong economy in the early years of Trump’s presidency undoubtedly boosted how the public views his handling of the issue, even in the face of the coronavirus crisis, Trump polled better on the economy than on most issues only months into his presidency, too. It’s hard not to see that as partly a result of the image he has sought to cultivate as a savvy businessman.

We can’t know how the public will react to the revelations in Trump’s tax returns, especially because we don’t know how quickly the news cycle will move on. But we have some evidence that it could make at least a few voters question Trump’s business acumen. And perceptions of that acumen have played a role in Trump’s electoral success. With The Times promising further revelations from Trump’s tax returns, Trump trailing in polls nationally and in most swing states, and people already starting to cast their ballots, the tax returns have the real potential to prevent Trump from making up ground on Joe Biden, or even to (most likely marginally) eat into Trump’s support as it currently stands.