The idea of Classification Algorithms is pretty simple. You predict the target class by analyzing the training dataset. This is one of the most, if not the most essential concept you study when you learn Data Science.

This blog discusses the following concepts:

In clustering, the idea is not to predict the target class as in classification, it’s more ever trying to group the similar kind of things by considering the most satisfied condition, all the items in the same group should be similar and no two different group items should not be similar.

Let’s understand the concept with clustering genders based on hair length example. To determine gender, different similarity measure could be used to categorize male and female genders. This could be done by finding the similarity between two hair lengths and keep them in the same group if the similarity is less (Difference of hair length is less). The same process could continue until all the hair length properly grouped into two categories.

Classification Algorithms could be broadly classified as the following:

Examples of a few popular Classification Algorithms are given below.

As confusing as the name might be, you can rest assured. Logistic Regression is a classification and not a regression algorithm. It estimates discrete values (Binary values like 0/1, yes/no, true/false) based on a given set of independent variable(s). Simply put, it basically, predicts the probability of occurrence of an event by fitting data to a logit function. Hence, it is also known as logit regression. The values obtained would always lie within 0 and 1 since it predicts the probability.

Let us try and understand this through another example.

Let’s say there’s a sum on your math test. It can only have 2 outcomes, right? Either you solve it or you don’t (and let’s not assume points for method here). Now imagine, that you are being given a wide range of sums in an attempt to understand which chapters have you understood well. The outcome of this study would be something like this – if you are given a trigonometry based problem, you are 70% likely to solve it. On the other hand, if it is an arithmetic problem, the probability of you getting an answer is only 30%. This is what Logistic Regression provides you.

If I had to do the math, I would model the log odds of the outcome as a linear combination of the predictor variables.

In the equation given above, p is the probability of the presence of the characteristic of interest. It chooses parameters that maximize the likelihood of observing the sample values rather than that minimize the sum of squared errors (like in ordinary regression). 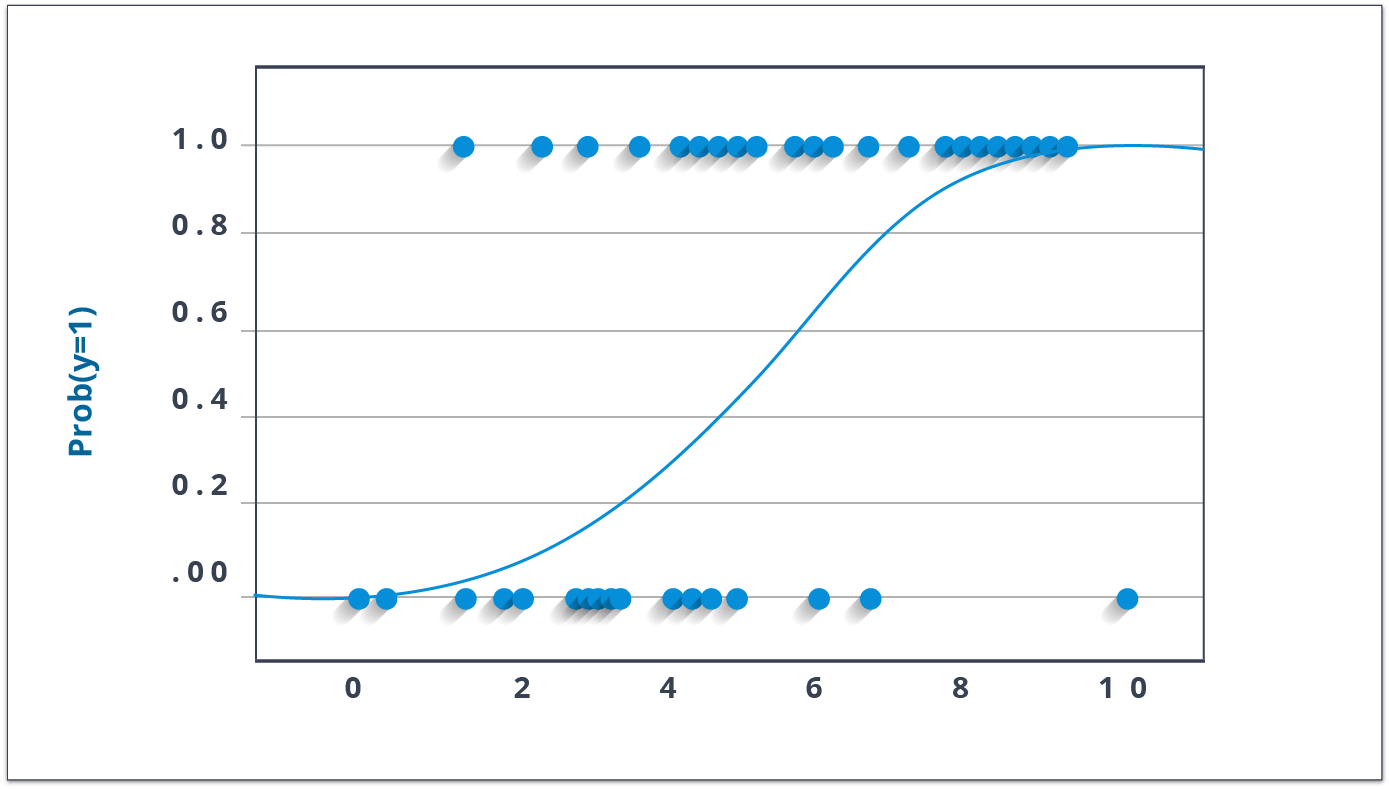 Now, a lot of you might wonder, why take a log? For the sake of simplicity, let’s just say that this is one of the best mathematical ways to replicate a step function. I can go way more in-depth with this, but that will beat the purpose of this blog.

There are many different steps that could be tried in order to improve the model:

Now, the decision tree is by far, one of my favorite algorithms. With versatile features helping actualize both categorical and continuous dependent variables, it is a type of supervised learning algorithm mostly used for classification problems. What this algorithm does is, it splits the population into two or more homogeneous sets based on the most significant attributes making the groups as distinct as possible. 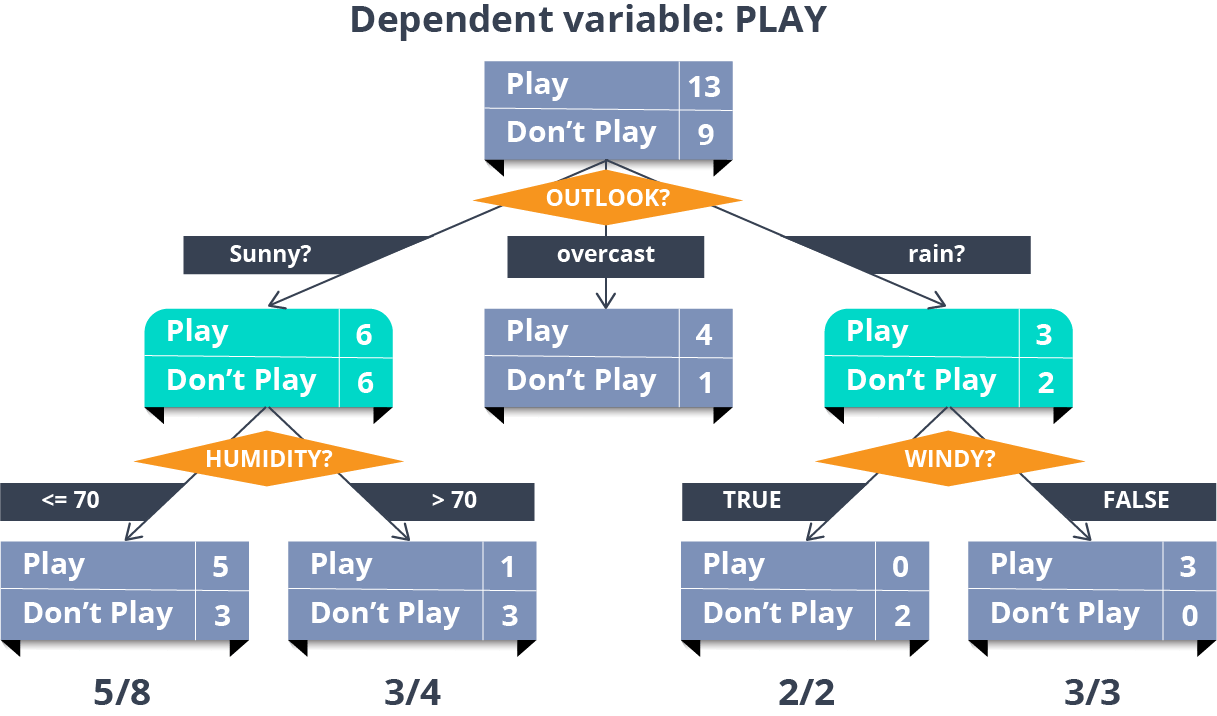 In the image above, you can see that population is classified into four different groups based on multiple attributes to identify ‘if they will play or not’.

This is a classification technique based on an assumption of independence between predictors or what’s known as Bayes’ theorem. In simple terms, a Naive Bayes classifier assumes that the presence of a particular feature in a class is unrelated to the presence of any other feature.

For example, a fruit may be considered to be an apple if it is red, round, and about 3 inches in diameter. Even if these features depend on each other or upon the existence of the other features, a Naive Bayes Classifier would consider all of these properties to independently contribute to the probability that this fruit is an apple.

To build a Bayesian model is simple and particularly functional in case of enormous data sets. Along with simplicity, Naive Bayes is known to outperform sophisticated classification methods as well.

Bayes theorem provides a way of calculating posterior probability P(c|x) from P(c), P(x) and P(x|c). The expression for Posterior Probability is as follows. 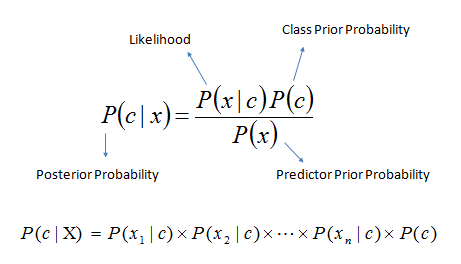 Example: Let’s work through an example to understand this better. So, here I have a training data set of weather namely, sunny, overcast and rainy, and corresponding binary variable ‘Play’. Now, we need to classify whether players will play or not based on weather condition. Let’s follow the below steps to perform it.

Step 1: Convert the data set to the frequency table

Step 2: Create a Likelihood table by finding the probabilities like Overcast probability = 0.29 and probability of playing is 0.64.

Problem: Players will play if the weather is sunny, is this statement correct?

Naive Bayes uses a similar method to predict the probability of different class based on various attributes. This algorithm is mostly used in text classification and with problems having multiple classes.

K nearest neighbors is a simple algorithm used for both classification and regression problems. It basically stores all available cases to classify the new cases by a majority vote of its k neighbors. The case assigned to the class is most common amongst its K nearest neighbors measured by a distance function (Euclidean, Manhattan, Minkowski, and Hamming).

While the three former distance functions are used for continuous variables, Hamming distance function is used for categorical variables. If K = 1, then the case is simply assigned to the class of its nearest neighbor. At times, choosing K turns out to be a challenge while performing kNN modeling. 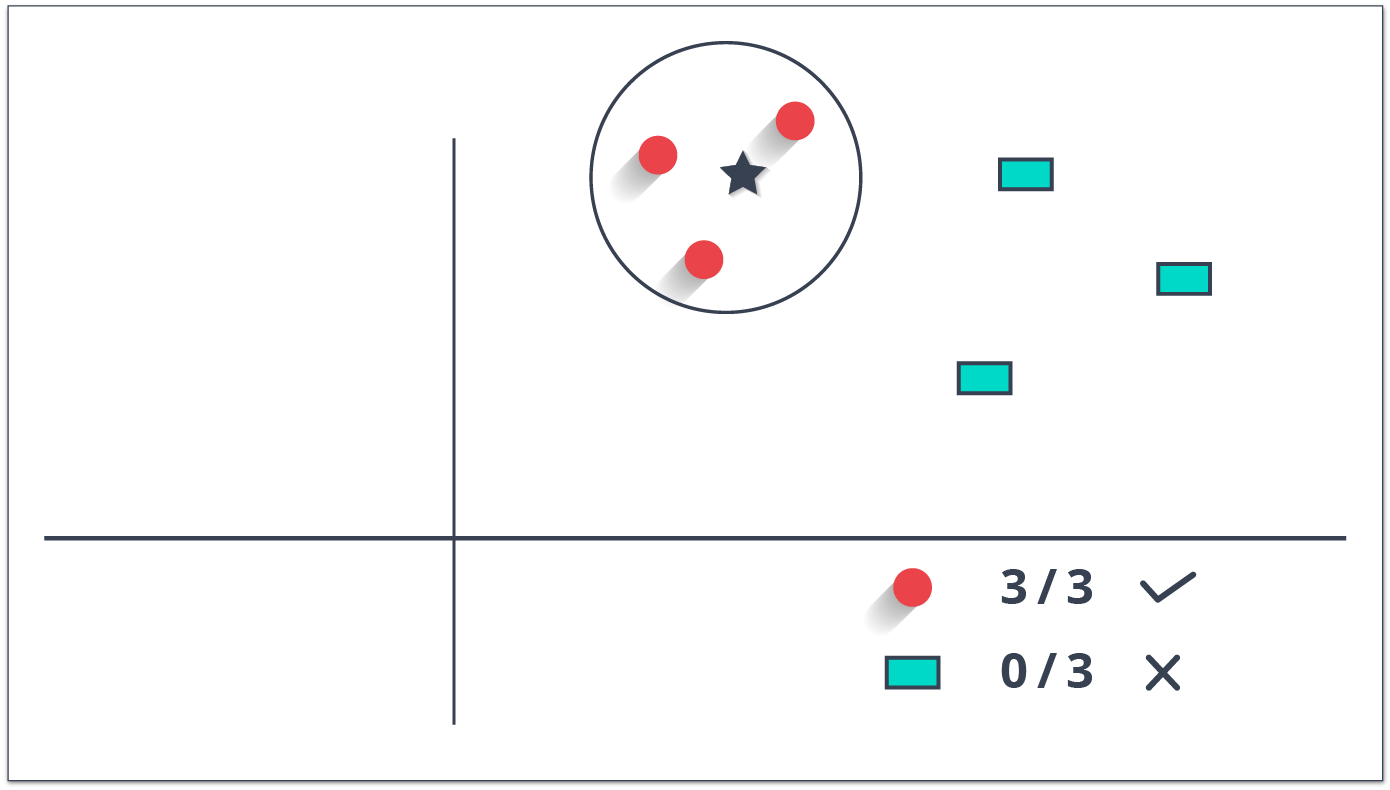 You can understand KNN easily by taking an example of our real lives. If you have a crush on a girl/boy in class, of whom you have no information, you might want to talk to their friends and social circles to gain access to their information!

Things to consider before selecting KNN:

In this algorithm, we plot each data item as a point in n-dimensional space (where n is a number of features you have) with the value of each feature being the value of a particular coordinate.

For example, if we only had two features like Height and Hair length of an individual, we’d first plot these two variables in two-dimensional space where each point has two coordinates (these coordinates are known as Support Vectors) 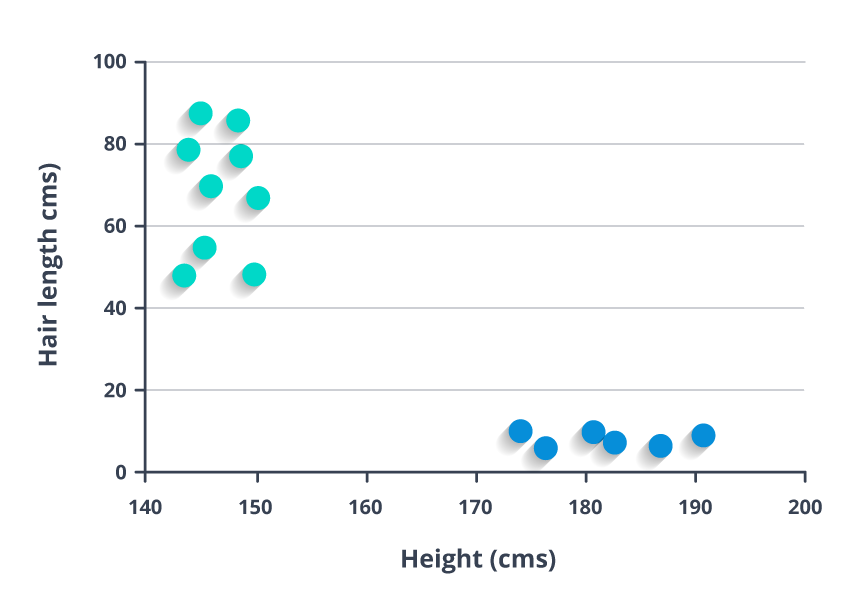 Now, we will find some line that splits the data between the two differently classified groups of data. This will be the line such that the distances from the closest point in each of the two groups will be farthest away. 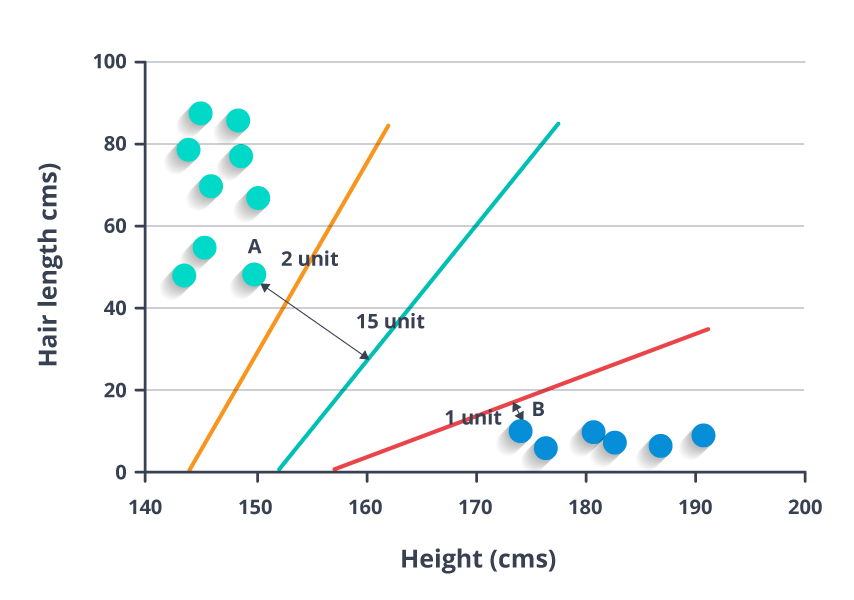 In the example shown above, the line which splits the data into two differently classified groups is the blue line, since the two closest points are the farthest apart from the line. This line is our classifier. Then, depending on where the testing data lands on either side of the line, that’s what class we can classify the new data as.

So, with this, we come to the end of this Classification Algorithms Blog. Try out the simple R-Codes on your systems now and you’ll no longer call yourselves newbies in this concept.