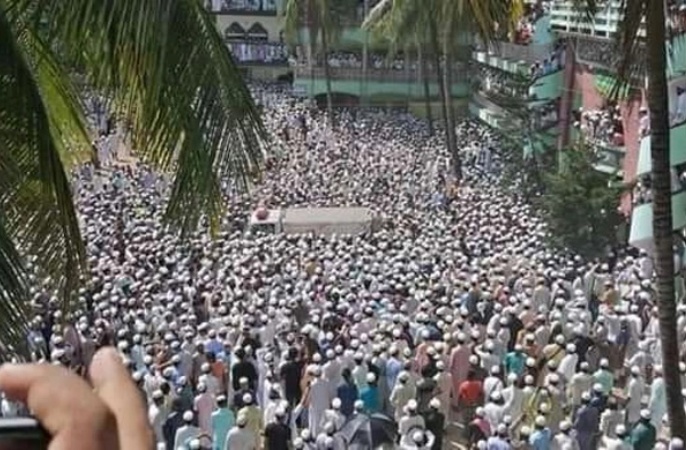 The body of Hathazari Madrasah rector and chief of Hefazat-e-Islam Allama Shah Ahmed Shaf, who passed away in the capital on Friday night, reached Chattogram on Saturday morning.

A coffin carrying his mortal remains reached the Hathazari Madrasah premises around 9:00am.

However, security has been tightened in four upazilas of Chattogram to avoid any untoward situation over the burial Ahmed Shafi.

Allama Shafi breathed his last at a hospital in the capital on Friday evening at the age of 104, within 24 hours of resignation from his post at the Hathazari Madrasah in the face of student protests.

His namaj-e-janaza will be held on the madrasah premises after Zohr prayers and be buried at the madrasah’s graveyard.

Sources at the Chattogram district administration said additional police and members of Bangladesh Border Guard (BGB) and Rapid Action Battalion have been deployed in Hathazari, Patiya, Rangunia and Fatikchhari upazilas.

Besides, seven magistrates have been deployed to maintain law and order in the upazilas from Saturday morning. Of these, four magistrates will be on duty in Hathazari upazila, said Md Omar Faruk, an assistant commissioner at the Deputy Commissioner’s office.

He said additional security measures have been taken to prevent any unpleasant situation at Hathazari Madrasah centering the student protests and the closure of the madrasah.

Along with police, 20 platoons BGB and RAB members will be on duty, led by seven magistrates, in the four upazilas, the official said, adding that all the security measures have been taken.

Students of the madrasah have been agitating since last Wednesday last.

Anas Madani, son of Allama Ahmad Shafi, director general of the madrasah, was withdrawn on Wednesday night in the face of demands of the students.

The protests turned violent after the Ministry of Education issued a notification  on Thursday closing the madrasah for an indefinite period.

Under the circumstances, Shafi announced his resignation from his post around 12am on Thursday.

Later, he fell sick and was was admitted to Chittagong Medical College Hospital. When his condition deteriorated, he was taken to Dhaka by an air ambulance on Friday afternoon.

He died there around 7 pm.

Shah Ahmad Shafi was the rector of Al-Jamiatul Alia Darul Unum Moinul Islam Hathazari, to give the institution its full name, and also the chairman of Bangladesh Qawmi Madrasah Education Board.

He was born in 1916 (1334-35 AH) in Rangunia of Chattogram and was educated at Hathazari Madrasah and Darul Uloom Deoband.