Saudi Arabia says flights to, from UAE can fly over kingdom

Saudi Arabia says flights to, from UAE can fly over kingdom 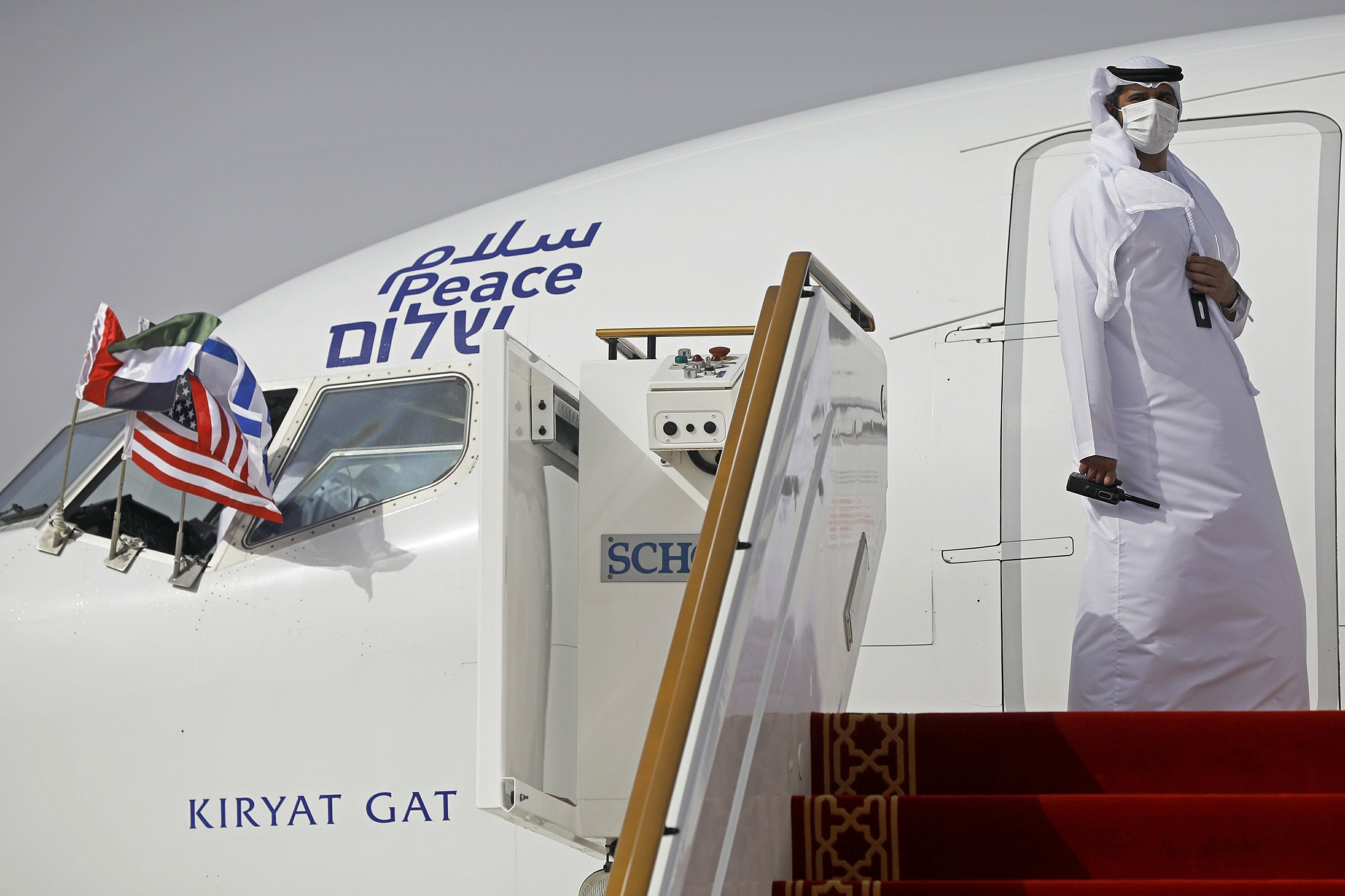 DUBAI, United Arab Emirates (AP) — Saudi Arabia announced Wednesday that flights to and from the United Arab Emirates “from all countries” will now be able to use its airspace — a statement apparently allowing flyovers by Israel following a deal to normalize UAE-Israel relations.

The vaguely worded statement avoided naming Israel directly. However, the announcement came just days after the kingdom allowed the first direct Israeli commercial passenger flight to use its airspace to reach the UAE. Any direct flight between the two nations would need to use Saudi airspace to be commercially viable.

The statement makes no mention of the kingdom’s rival, Iran, nor Qatar, which Saudi Arabia is currently boycotting. Flights between those countries to the UAE would, in theory, not need to use the kingdom’s airspace.

The official Saudi Press Agency said the move comes in response to a “request by the UAE” to open routes to and from the country.

Saudi Foreign Minister Faisal bin Farhan al-Saud wrote on Twitter that the kingdom’s “firm and established position toward the Palestinian cause and people will not change.” However, even he did not name Israel in his tweet.

“For years, I have been working to open the skies between Israel and the East,” he said, hailing the “tremendous breakthrough” that Israeli planes can now fly cheaply and quickly from Israel to the Emirati capital of Abu Dhabi and skyscraper-studded city of Dubai. Avoiding Saudi airspace would add around four hours to the journey.

Earlier this week, Jared Kushner, the U.S. president’s son-in-law and senior adviser, flew with a high-level Israeli delegation to the UAE on the first direct commercial passenger flight between the two countries, a Star of David emblazoned on the jet’s tail. The flight traversed Saudi airspace, signaling at least acquiescence for the breakthrough U.S.-brokered agreement by the United Arab Emirates to normalize relations with Israel.

The Saudi announcement comes as Kushner is traveling the Middle East to build on the momentum of the UAE deal and press other Arab countries to establish formal ties with Israel, even before it settles the conflict with the Palestinians — long considered a requirement for normalization.

After leaving Abu Dhabi, he headed to Saudi Arabia to discuss “prospects for peace” in the region with Crown Prince Mohammed bin Salman, who has expressed willingness for the kingdom to engage with Israel. The kingdom is close to the UAE, and, along with other pro-Western Arab governments, sees Iran as a major threat.

Although shared enmity of Iran has largely overtaken traditional Arab support for the Palestinians, Israel remains unpopular in much of the Arab world. The UAE has promoted the deal as a tool to force Israel into halting its contentious plan to annex parts of the West Bank sought by the Palestinians for their future state. Saudi Arabia welcomed the UAE’s move but was careful to stress it would only open ties with Israel on the condition that peace is reached with the Palestinians.

The Palestinians have fiercely opposed the normalization as peeling away one of their few advantages in moribund peace talks with Israel.

President Abdel-Fattah el-Sissi of Egypt, one of two other Arab states to have full diplomatic ties with Israel, reiterated his country’s support for the UAE-Israel agreement. In a phone call with Netanyahu, el-Sissi said Egypt supports “any steps” that may help establish an independent Palestinian state and “provide security to Israel,” according to the Egyptian leader’s office.

Later on Wednesday, Kushner traveled to the tiny Gulf state of Qatar and met with the country’s ruling emir, Sheikh Tamim bin Hamad Al Thani, to discuss the Mideast peace process, according to Qatar’s state news agency. The emir called for a “just settlement of the Palestinian issue” based on the two-state solution, the agency said.

The oil-rich country is a close U.S. ally, home to thousands of American troops. But a bitter regional dispute pits Qatar against neighboring Gulf states and Egypt, which imposed a four-nation embargo in 2017 over Qatar’s support for Islamist groups and relations with Iran.

While it stands apart from the emerging Israeli-Arab alliance against Iran, Qatar consistently coordinates with Israel to deliver hundreds of millions of dollars in humanitarian aid to the impoverished Gaza Strip ruled by Islamic militant group Hamas.

Full/More Story at Source
Saudi Arabia says flights to, from UAE can fly over kingdom